“Long time listener, first time caller” may be an old fashion way to describe my SOLSC experience, but today I am taking the risk of posting with the official badge. Why is this so difficult? I’m not sure if I fear the commitment of posting each week, or am intimidated by the brilliance of others who post under this same badge. Today, I just want to write. 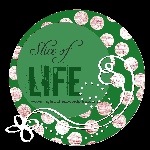 Golfing with Grandpa. Sigh. It paints a serene summer morning picture in my mind. Quiet– just tweeting birds and an occasional whack of a club. Slow– especially on a hot and hazy morning. I’ve watched enough golf on t.v. to know what it must be like without any applause from the gallery.

Those who golf with my Dad know this isn’t the case. This is how you golf with Jim…

Out of the cart in .325 seconds. Grab a club in .175. Ten giant steps to the ball. Ready. Aim. Swing. Watch the ball land. Nine giant steps back to the cart. Return club to bag as you get in the cart, but before your arse hits the seat or his left foot (your right) makes it inside, the accelerator is full on. And he doesn’t let up until he reaches the next stop, not even around corners. Repeat. There’s not much conversation, and nothing that hints of tranquility. He hasn’t been able to slow down, not even in retirement.

Mom decided that it would be a good idea to take Drake to the golf course to get him out of the house and into some fresh air. Let’s face it, the fourteen-year-old needed to give his thumbs a rest. Both Dad and Drake tried to support each other by never agreeing to the plan. Grandma usually gets her way if she persists. She persisted. Drake was up and ready to hit the coarse at 7:00 a.m.– that, or he hadn’t yet made it to bed.

They played through six holes before Dad’s golf cart habits got the best of him, or at least the best of Drake.

“I looked over, and he wasn’t there!” Dad recalled.

Dad managed to buck Drake right out of the cart. By the time he realized it, Drake’s face was planted somewhere along the cart path between the 6th and 7th fairways. I wasn’t shocked by the road rash on his elbows, hands and knee. I was, however, relieved that Dad didn’t suffer a heart attack when he looked back and saw Drake splayed in the rough like da Vinci’s Virtruvian Man. Drake was stunned, but was able to right himself before Mom’s cart crested over the bunker. She might have never found out if he hadn’t been bleeding. He was bleeding. My guess is, Dad will never be able to live this one down.

Today is a new day. Drake is fine, maybe even a bit proud of his war wounds. Dad checked in with the following message upon his return from the day’s golf outting sans Drake or Mom:

“How are my grandson’s arms? While at the scene of the throw out, I paused for a minute,” he wrote.

I imagine that, if he truly paused, he floored it the rest of the way.